Every new Windows release brings with it lots of amazing features and goodies to sort through.  In truth, it’s always a bit like Christmas for PC folk.  Even if many of us continue to use Microsoft’s older software systems (why mess with something that works, right?), the truth is, we’re at least interested in what’s in store for the future.  Also, there’s the promise, maybe an impossible dream, that this might be that one magical OS with staying power and assets to not require upgrading for quite some time.  Certainly a lot of businesses and big organizations would love to get their hands on a solid long-term operating system which doesn’t require them to dish out exorbitant sums annually (when obsolescence comes knocking).   This seems even more likely with the inexplicable jump from 8 to 10, bypassing 9 as if it were somehow cursed or predestined to be doomed.   With Windows 10, it would seem that Microsoft is putting forward lots of neat additions which will improve upon the basic platform we all know and love… 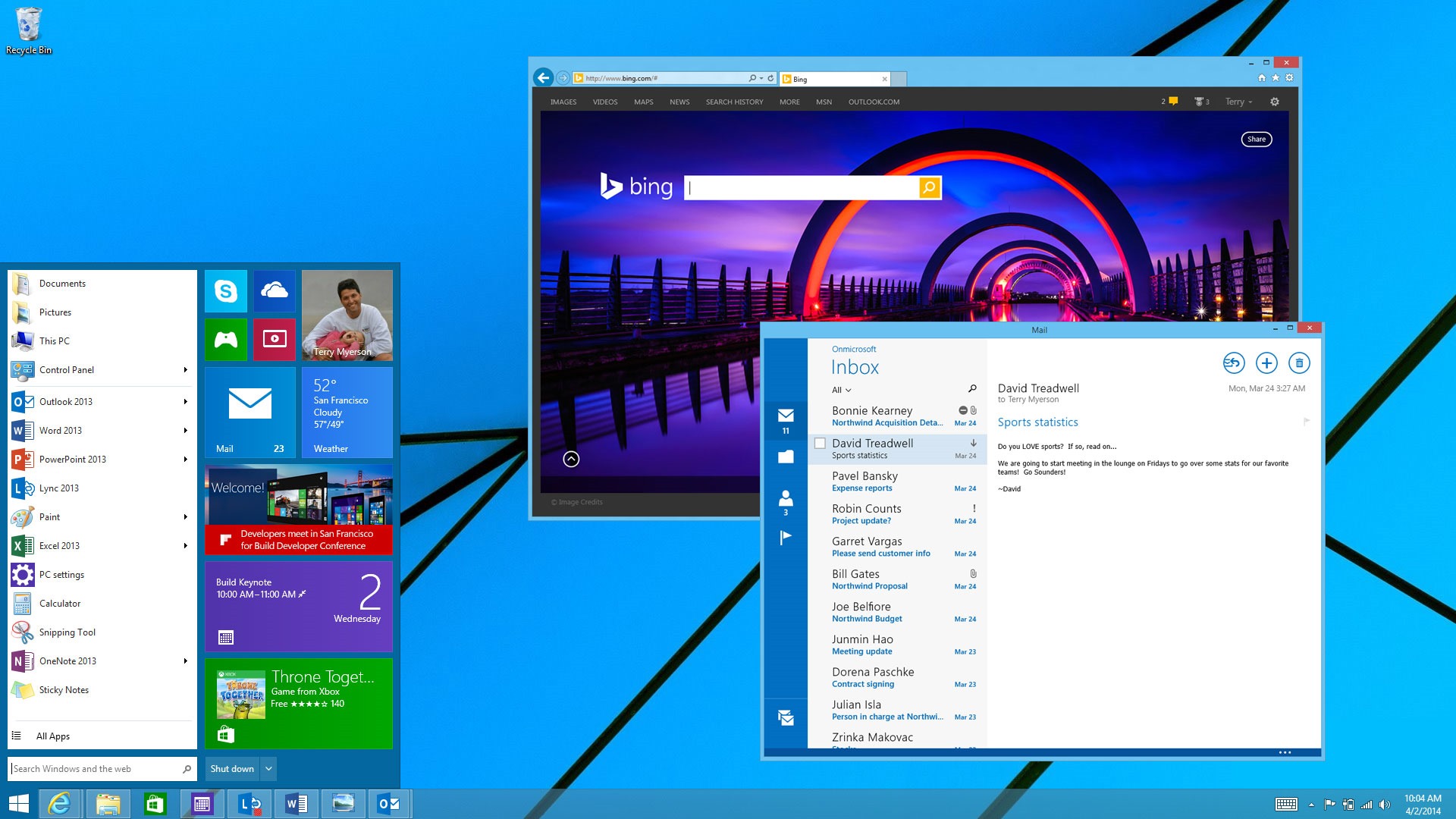 Who said that only new apps are good or worth keeping?  Realizing that it is ultimately foolish to discard functionality for quality apps that everyone likes and uses, Microsoft is introducing “Universal Apps”.  This is really just another way of saying that everything in the store is going to be compatible with Windows 10.  Moreover, another implication is that the OS will be found across every size and shape of platform, from the tiniest cellular to full-sized desktop rigs, etc.

Basically a slight revamp of the Windows 8 start menu

Those who have already gotten used to the look and feel of Windows 8 will also be happy to note that they’re not really changing it up too much.  For all intents and purposes, 10 is going to be utilizing the same scheme, only appending various improvements to make it worth your while.

Speaking of start menus, what about the recycle bin?

It might seem like a slightly odd thing to nag about, but the fact that you couldn’t easily pin the recycle bin to the task bar has, well…..annoyed quite a lot of people.   Never fear, MS is on it and has responded by dealing with that situation straight away.  Now, you can achieve this with just a click or so.

Perhaps an even more obscure, yet startling long overdue addition to a Windows OS is the ability to past stuff into command prompts.  For those who use such things on a regular basis this relatively simple yet very useful inclusion is nothing short of a revelation.   Not to mention, these sorts of windows will not be more modifiable, allowing the user to vary things like transparency.

Arguably (and as previously mentioned), some of the biggest and best features in Windows 10 might be for businesses.  Enhanced security features for corporate data or mobile management rest alongside special stores which enterprises will most definitely want, or need to check out.   Their basic premise here is to essentially segregate personal and business-related materials and data, in order to prevent the two from bleeding into each other and causing problems.  To be honest, this is a very forward-thinking addition that lots of corporate groups will undoubtedly get plenty of mileage out of.

The “touch” system is slated to change

Windows 10 isn’t leaving those with a preference for touch control out to dry either.  They’re actually updating the existing system, seemingly taking another stab at it again from the ground up.  This time around, expect to encounter plenty of touchscreen goodies though, enough to keep you busy learning how to use them for quite some time.

Home placement for the most used folders

Rather than playing the guessing game as to where most of your most used, favorite and recent items are, Windows 10 has added a home section to Explorer.  Here, your basic necessities will be quickly accessible, thereby increasing intuitiveness and productivity.  Assuming that you cover a lot of material and constantly flip through folders, perhaps due to the nature of your work or media/content juggling, this addition will be most useful indeed.

What’s this about “Continuum”, anyway?

Then there’s continuum, which is perhaps one of Windows 10’s best new features.  In short, it is a system which provides support and solutions when there are no clear control options available or setup states change, let’s say you’re blasting away typing on something and you accidentally disconnect your wireless or wired keyboard from the computer… In a normal, pre W10 situation, this might mean that you’ll have some issues to sort out, but not with continuum on board.  With it, prompts change automatically between touch and non-touch modes, meaning that you’ll never be left stranded or disconnected.