Apple is the great American innovator of the 20th century, but the company has actually been built on seeing the potential in existing products and making them easily usable. Can Cupertino weave its magic wand again in the music streaming business, an industry where there are already some big hitting success stories? Apple Music launched last week and we have of course been getting to grips with it, but the question on everyone’s lips is… Apple Music or Spotify, which is best? 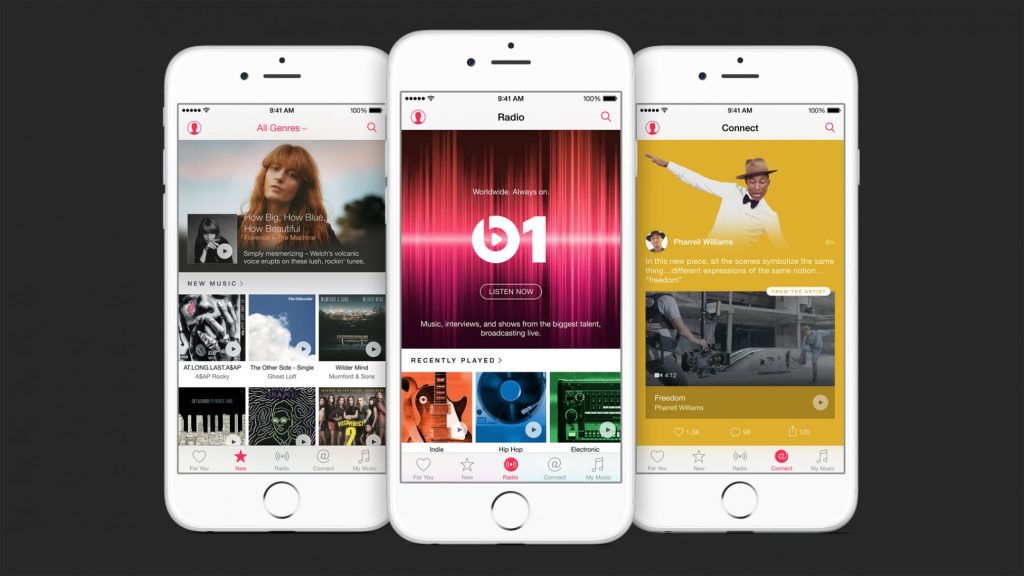 Spotify is the juggernaut music streaming service that everyone agrees is pretty much head and shoulders above the rest in terms of quality. That was until Apple Music came along however, so here are the differences between the two companies vying for supremacy in the music streaming market.

It’s all about the music and one of the reasons (there are others) why Spotify has become so popular is because it offered more music from more artists. With 30 million songs Spotify is hard to beat, but it is hardly a surprise that Apple Music does not emerge victorious here, but it does draw even. With 30 million songs as well, Apple Music keeps pace with Spotify and Cupertino promises that once its service gathers momentum it will have more songs and artists than its new rival.

Considering Apple’s massive clout in the music industry because of iTunes, it is hard not to believe the company when it says one day it will have more content. However, right now there is no separating Spotify and Apple Music on music catalogues alone.

Apple’s Music Library is huge of course, but not all songs are available for streaming. For instance, while you can buy The Beatles back catalogue via iTunes, you will not be able to stream it via Apple Music. Taylor Swift is one major artist who is available on Apple Music, you will not find her work on Spotify… we will let you decided whether that is a good or bad thing. The truth is, both services boast the major artists and songs, you may find some oddities like above, but for the most part everybody is catered to on Spotify or Apple Music.

Apple is talking up the fact it will have more content from emerging artist, but at the moment that is not the case so it is hard to award its service anything until that proves otherwise. Both services also let you add tracks you already have on your computer to playlists alongside streaming songs. We could argue that Apple Music makes this easier, especially if you use iTunes as your music curator; you probably have a vast library and it is easy to pull any track, artist, or album from your library straight to Apple Music to sit alongside a streaming playlist. Spotify does not have such a native service so it has to lose points here, but that’s not to say its system for doing similar is problematic… it isn’t.

Music curators have been trying to get smart about how they offer you new content for years and Spotify has been pulling it off well since its launch. Apple Music has arrived and it too uses a system to understand your listening habits and offer you new music based upon them. Both services are very similar in this aspect, but do go about it in a different way.

For example, Spotify is less obvious about its offering, putting a Discovery menu within its Browse tab that suggests recommendations based on what you listen to. This is not shoved in your face like Apple Music (more on that in a minute) and instead Spotify is readier to let you decide when you find new artists or songs. Interestingly and contrary to Apple’s boast that it will have more content from emerging artists, Spotify tends to be better at recommending new music from more obscure artists, allowing you to find some real gems.

Apple’s recommendations are more obtrusive and uses Beats Music to constantly monitor what you listen to and then offer possible matches of something similar. Apple Music does this almost all the time and the “For You” tab is like a revolving door of artists and songs you may or may not have heard before. Apple claims it uses real humans (as well as algorithms) to find new music. For the most part it works and For You is certainly more dynamic than Spotify’s offering, but Apple Music loses out simply because it tends to offer artists that are more popular, i.e. ones we would already know.

As well as allowing you to stream tracks, Spotify and Apple Music both have radio, but once again they both go about it slightly differently. Apple’s service has its own radio station called Beats 1 that streams 24/7 from London, New York, and Los Angeles, which works like a traditional station. Cupertino has real (world renowned) hosts and really has typical radio shows (music, chat) in a classic sense.

Spotify on the other hand lacks live radio and if we were being hyper pedantic we could say it does not really have radio at all. Instead the service lets you find music based on the style of music you enjoy and then create endless playlists. It is not quite as robust as Beats 1, but then it certainly works better than the similar offering Apple Music uses, which has resulted in crashes to the app and other bugs.

However, for a pure radio experience, Apple Music gets it.

Hey, you found a new song or artist and you think you may be the only one amongst your friends who knows it, so obviously you want to share your discovery. Spotify is ideal in this aspect as it lets you post an artist, album, playlist or individual track to your personal Spotify, Facebook, Twitter or Tumblr. You can also share with individuals Facebook, e-mail, and text message, WhatsApp or Google Hangouts. Indeed, Spotify feels much more socially aware as you can even follow friends and then pick up on trends.

Apple Music on the other hand is lacking in this area. We imagine Apple is working further on what is after-all a nascent service, but at the moment you can only share via text, email, Twitter, Facebook, and AirDrop. Also, there is no way to connect with your friends.

Spotify has been in the game a few years now and has had plenty of time to refine its UI and navigating the service is a doddle by now. Even new users will be able to quickly pick things up and whirl around the interface with ease… that is certainly not the case with all music streaming services.

Apple too has done a great job in this aspect and we really expect nothing less as the company is one of the best at doing simple UI but offering plenty of features.

Apple Music has put a major dent in Spotify’s long terms ambitions simply because the largest company on the planet entering any industry changes the landscape. However, Spotify more than holds its own and there is really nothing to separate between the pair. If you are a long time user of Spotify there is simply no reason to switch to Apple Music, likewise if you are new to music streaming then Apple Music would be an ideal place to set up shop.

We are sure power users will cite things on either service that make the difference either way, but for the casual user both offer much the same features, are both easy to use, and are both stocked with the same amount of songs.

Really the race begins now and what the companies do from now on will likely decide who comes out as the market leader. If Spotify can keep its feature rich ideas coming then it could stay out in front, but Apple Music is new and arrived ready to compete, if Cupertino builds from a strong starting position it could take over.

You probably wanted a definitive answer, but sadly we think it would be remiss to choose either as a clear winner.