Rocksteady games is back with its third take on the Batman universe and is closing out its Arkham series with Arkham Knight, a game that delivers plenty of what fans have been asking for but misses a few beats in the process. This is the spiritual successor to 2011’s Arkham City and comes after 2013’s Arkham Origins prequel (that title was not developed by Rocksteady). 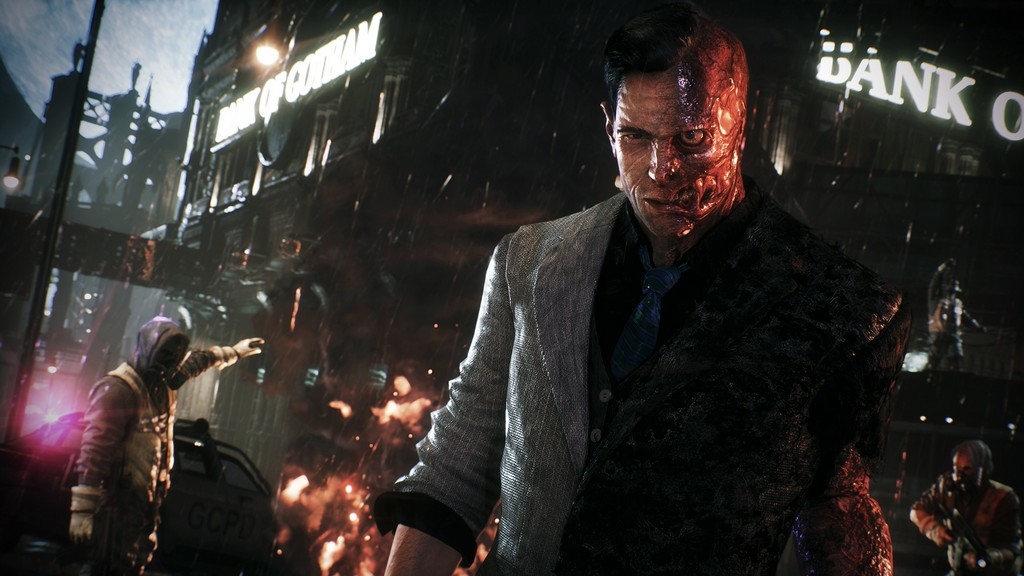 Much of the talk in the build up to this game has been the inclusion of the Batmobile, the first time in the series that Batman’s main chariot has been useable. As a concept and in general use the Batmobile is an utter joy and it has opened up the game far more than any Arkham title before. However, while I loved certain aspects of the Batmobile I found myself increasingly frustrated by its use within the story of the game.

Despite that, I found that Arkham Knight is the biggest game in the series by some distance and marks the first time when you really feel that Batman’s abilities are virtually limitless. In other words the Dark Knight can do things he has never been able to before and Gotham City is now a truly special place to navigate. Does all that translate into a stellar game? Almost, but not quite.

Batman: Arkham Knight is set once again in Gotham City, home of the Dark Knight but also a multitude of supervillains. On Halloween Scarecrow threatens the city with a new potent does of his toxin, forcing authorities to evacuate all civilians. As Batman attempts to counter Scarecrow’s nefarious plans he will have to deal with his most famous of enemies, including Penguin, Two Face, Poison Ivy, Catwoman, and the Riddler.

While The Joker died in the last instalment, the chief antagonist in the Batman series makes a return here, we will not spoil the how’s and why’s though. I personally think the previous Arkham games have offered rich and immersive storytelling and have been amongst the best Batman incarnations in any medium. Sadly, Arkham Knight is easily the worst from a pure storytelling perspective, the arc is more predictable and even the voice acting and script seem to have taken a hit.

It’s not terrible by any means, but considering the near perfection of the previous titles in this aspect, we must take points off for the poorer story.

Arkham Knight is very much a mixed bag between old and new, but surprisingly it is the series standards that still impress the most. Firstly though we will discuss the main new gameplay element of this title, the Batmobile. Fans have been calling for this since the original Arkham Asylum and now they can drive around Gotham in Batman’s car.

Already on paper that seems cool, and luckily it is uber-cool in the actual game, and I wasted plenty of time just driving around the city doing nothing. That is one of the joys of the Batmobile, you can use it virtually any time you want and just drive around, while also using it within missions and to reach story points. It is truly a delight to smash through walls and even grapple and jump from building to building in the car, akin to the Tumbler from the Dark Knight movie trilogy. 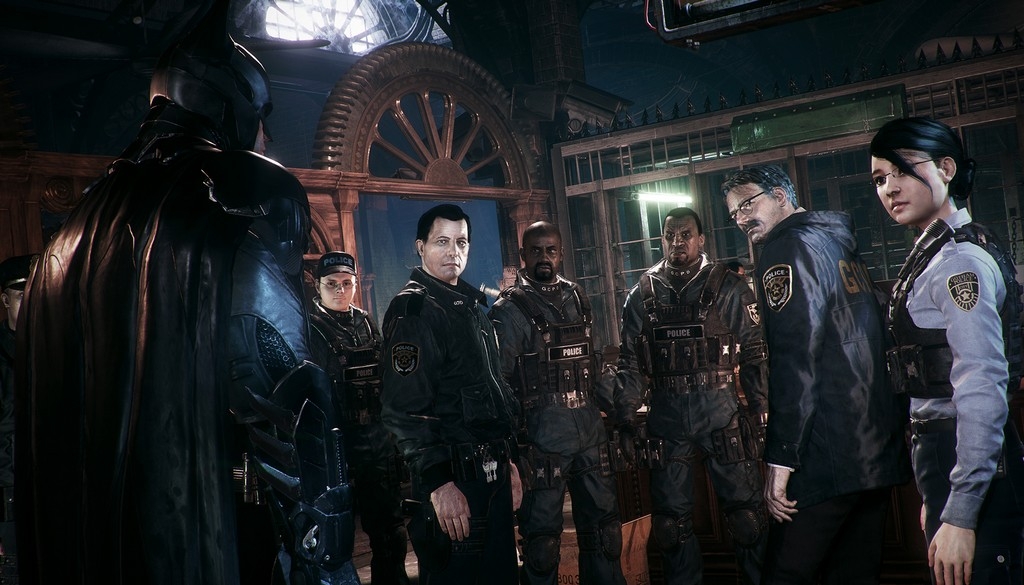 However, while in some aspects the Batmobile is a highlight, it also manages to be the biggest let down of Arkham Knight. Firstly, this is of course not a true racing game or even close, so handling the Batmobile can be a little ropey at times, although I readily admit that is a minor gripe. A far more substantial problem is the vehicle combat in Arkham Knight, which I found to be tiresome at best and downright frustrating at worst.

Simply put, fighting in the Batmobile is too repetitive, essentially amounting to you in the car facing off against robotic tanks. Not necessarily a bad concept, but the reality is extremely boring and really lacks imagination as the Batmobile locks down in battle mode and can move in 360 degree circles to target the tanks with your cannon. It gets old pretty quickly and one mission near the end sees you face off against Cobra tanks, essentially unbeatable face to face, which means you need to sneak up on them. Stealthy moves in the Batmobile are an absolute misfire and I was in full insane mode, screaming at the game, because of my frustration. It actually served to kill some of the momentum in the final act, which is no good thing.

While the Batmobile provided a love and hate experience, the combat and movement of Batman remains an utter joy. In fact, Rocksteady merely tweaked what it already had and the result remains perfect, just a 100% home run when it comes to game enjoyment. It is not getting old at all to kick ass as the Dark Knight, even if we have seen many of these moves before… they just feel fresh.

Batman does have some new tricks up his sleeve (or should that be under his cape?), such as a new voice imitating tool that makes cannon fodder henchmen approach thinking one of the main villains is calling for them, only for Batman to lay the beat down. The Dark Knight can also throw batarangs in mid-air while gliding, he can eject from the Batmobile into the heart of the action. We are really scratching the surface for all of Batman’s new tricks, but they nearly all enhance the gameplay experience and are among the best aspects of the title.

We would be remiss not to talk about Gotham City itself, because it really is a beautifully realized gaming environment. It is three times bigger than Arkham City and truly feels like a city to explore, which is something you can do until your heart’s content. For instance, I wasted maybe an hour just running around, gliding, grappling to the tallest buildings (including Wayne Tower), and of course goofing off in the Batmobile. All cheap thrills for sure, but welcome distractions, and Batman: Arkham Knight excels at both. 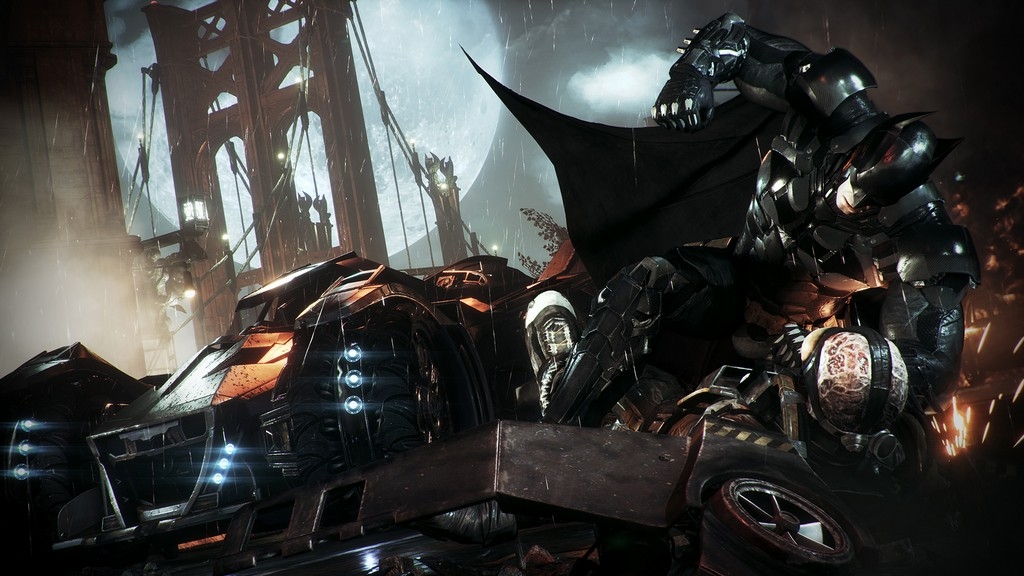 Aside from the 14 or 15 hour main story, Rocksteady has once again littered the game with a lot of side missions, and they are a triumph. You can tag team attack by calling in an ally such as Robin or Nightwing, while fighting off against some of the classic villains (the Two Face bank robberies are a highlight) is exciting. Rocksteady is showing again that it knows how to pay fan service. Even the Riddler missions (previously an afterthought) are now more fleshed out and enjoyable, and of course all of the side missions let you explore the city even more.

The previous two Arkham games from Rocksteady were just about perfect, so with the inclusion of the Batmobile we were expecting Arkham Knight to follow suit. Unfortunately it doesn’t quite manage to do so and ironically it is the Batmobile than hampers the game the most. I loved just using the vehicle, but when it came to combat or using it within the main story arc, it simply fell flat and even became an annoyance.

I was also left wanting more from the story, and think that it was not at the forefront of the developers process as it was in previous instalments. Yes, those are two hefty complaints right there, but after that Batman: Arkham Knight remains a stunning game. It has amazing combat dynamics, a massive and awe enducing open world to explore, and cheap thrills aplenty.

It is not perfect, but it is still a must have.

Batman: Arkham Knight brings back plenty from the previous games that everybody loved, and is a compelling action game. Fans of the series or even those new will get almost everything they wanted, although we would have loved for the story to be more robust and for the otherwise excellent Batmobile to not be such a bore in combat mode.