Laptop computers in particular are one of the most relied-upon types of technology in 2014. Virtually all businesses and most individuals have a laptop, because they offer the power of a desktop computer but in a small and portable form factor. There are many different types of laptop computer on the market, ranging from small netbooks and thin Ultrabooks to powerful gaming laptops developed by manufacturers such as Alienware.

Many people also opt for Apple MacBook Air and MacBook Pro laptops, as they are often used by people in the music and entertainment industries. For the most part, laptops are pretty reliable and hardy, but it’s only when things start to go wrong do we realise just how reliant we are upon these portable pieces of technology!

If you own a laptop and it seems to have stopped working properly, you are probably starting to panic right about now! You will doubtless have thoughts of expensive repair bills or worse, needing to spend lots of money on a brand new laptop to replace this one! But what if I told you that you could have a go at diagnosing the fault yourself?

As a computer engineer, I have often found that the problem is usually caused by one particular fault that can be rectified by someone that has an interest in electronics or just loves to take things apart, repair them and put them back together again.

Of course, this isn’t for everyone, especially those that simply don’t have the time to repair their laptops themselves. However, spending a bit of time diagnosing the source of your laptop’s problem will help you to determine what sort of repairs it is likely to need, along with how much it will cost to be fixed, so that you can decide whether a repair or replacement is worth it.

Here are some of the most-common faults in laptop, along with the steps needed to diagnose and repair them.

In my experience, the biggest cause of laptop problems is due to them overheating. Laptop computers are inherently small and don’t have much space for ventilation, so manufacturers install small fans inside of them to keep them from getting too hot.

Unfortunately, what happens over time is that dust, dirt and even hair can get sucked into the vents and block them up, especially if the laptop in question is kept on the floor a lot and dust is being thrown around in the air each time you or someone else walks on the carpet.

When these vents and fans get blocked up, the hot air cannot be efficiently expelled from inside of the laptop and so it starts to overheat. You can tell if your laptop is overheating because it just suddenly shuts itself down; this is to prevent major damage to your laptop’s internal components.

There are two ways of fixing this problem:

Laptop batteries tend to only last about as long the manufacturer’s warranty (typically 12 months) and you can guarantee that your laptop battery will start to fail a few days after that! This might sound like some kind of urban myth but trust me, I have witnessed this happen with my own eyes on several occasions – and it doesn’t seem to be manufacturer-specific either!

If your battery is not charging, and perhaps an error message is being displayed as you boot your laptop, it is worth checking what state of charge it’s in using a battery tester (like the ones sold here), as on some occasions the charger could be at fault rather than the battery itself.

Should the battery be completely flat, then it’s fairly safe to assume that you need a new one!

Weird blocks and symbols are being displayed on the screen 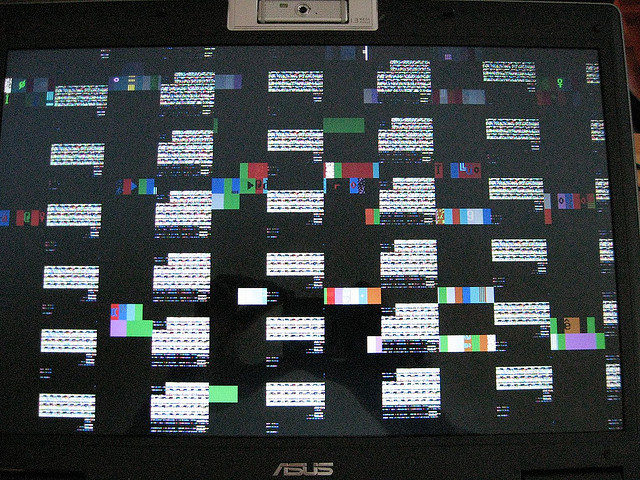 Such a problem is normally preceded by other issues such as your Wi-Fi or Bluetooth connections not working, and is usually caused by the laptop overheating. The only way that this problem can be resolved is by having a specialist laptop repair centre fix it for you. You can typically expect this to cost you at least GBP £100 (US $160) to have sorted out.

Does your laptop display only work if it’s positioned at a specific angle? If so, you will need to either repair or replace a thin piece of cabling that runs from your laptop’s motherboard to its screen.

Usually this happens if the cable has been caught near one of the screen hinges; the cause of this problem is typically from a poor reassembly of the laptop when a previous issue to the laptop’s internals had to be fixed.

Display looks like the brightness has been turned down

When your laptop displays an image on the screen that looks like someone has turned the brightness down to its minimum setting, this could indicate a faulty screen inverter board. The inverter has the job of converting electricity into the right amount and format to be used by the LCD panel.

If it becomes faulty, the above problem will occur. There are some occasions where the fault might be down to the backlights, but 9 out of 10 times the issue is to do with the inverter board. In order to replace the inverter board yourself, you will need to determine its part number; this can only be done by removing it from your screen first. 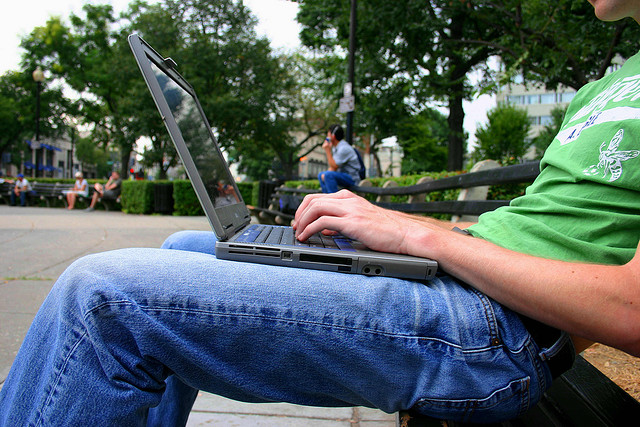