VPN stands for Virtual Private Network, and its basic function is to serve as a private network that extends across a public network, such as the internet. It serves many purposes, but as the name and basic function suggest, the point is to ensure privacy when using your network. There are also multiple types of VPN, but once again the core advantage is privacy. It works by treating your public connection as a private one, blocking outside users from accessing your information and communication. VPNs are used either to connect a computer to a 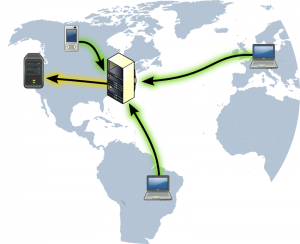 network (known as remote access) or to connect two networks (which is called site-to-site).

There are multiple ways that a VPN can be created, but all of them will help you secure your
information from third parties. There are three main advantages that a VPN can offer you, detailed below, but the possibilities are basically endless.

For Those who get Banned

Many websites are able to ban your IP address. However, this is easily overcome by using a VPN. In fact, a VPN is an obvious weapon used by internet trolls – this is because they are able to contentiously return after receiving an IP ban. With this said, a VPN is a useful tool for those who were incorrectly banned from a service or website. Ultimately, a VPN will allow you to re-access the internet based service once again.

Different countries around the world offer different webpages and different levels of access to a given webpage. A VPN allows you to bypass these restrictions and access anything on the internet no matter where you are in the world. For instance, a VPN could allow a simple North Korean citizen to read American news, or it could let an American watch a Canadian TV show. There are no borders- virtual or otherwise- when browsing the internet through a VPN.

The world is changing, and one of the big changes is that more and more employees are starting to work remotely. If you want an employee to be able to access your office’s network from home, you’ll need a VPN to do it. A VPN can connect a remote employee to your company’s intranet through the internet, which is awesome because it lets that employee interact securely with everyone as though his computer was directly connected to your local network.

For a Growing Company

Your small business started in the middle of Nebraska, but now you have an office in Denver and an office in Chicago. In order to keep these offices connected, you’ll use a VPN classified as a “site-to-site” network in order to keep everyone connected. That means that your Chicago accountant can securely talk to your Denver salesman, even if the two are hundreds of miles away, and any sensitive information will be kept totally private.

While VPNs are one of the most secure ways to handle networking, they are not one hundred percent safe from nefarious parties trying to access your information. The easiest way for a hacker to access your VPN is by stealing the physical computer of a party who is using this. In order to prevent this from occurring, passwords should be good and never recorded somewhere else on the machine. Physical security should never be sacrificed just because your digital connection is secured, so don’t forget to instruct everyone on your VPN to keep their desktops or laptops safe. If you’re looking for a reliable VPN provider then we recommend PureVPN – a quality provider who has become a leader within the industry. What’s more, they are value for more.