Back in the day, security systems generally consisted of CCTV (closed-circuit television) cameras being connected by coaxial cable to a central control room. Those of you old enough to remember will recall that such systems often gave grainy, monochrome video output that had a slow frame rate.

Such archaic systems were never particularly reliable, because you couldn’t expect any thieves or vandals to walk across your store real slowly and right up to the camera for identification purposes (and obviously, they wouldn’t do that – not unless they were extremely stupid)!

Those old CCTV systems were often connected to VCRs (video cassette recorders – something people used way before DVD and Blu-ray technology came along), and because people often recycled old videos, the quality of CCTV video decreased significantly over time, so even if a thief ran up to a camera and waved at it for at least 5 seconds, you still wouldn’t be able to make out their facial characteristics!

Thankfully, surveillance technology has moved on quite a lot since those times, and not only are CCTV systems considerably more affordable, making them within reach of all businesses and even many homeowners, they have also gone wireless too!

If you are considering beefing up security at your business premises, then I would highly recommend that you get some Tag Systems Wireless Solutions installed. Here’s why:

As I mentioned earlier, the days of dodgy CCTV footage are long gone now, and commercial surveillance systems are highly reliable. Virtually all systems record in colour and with a decent frame rate, so you no longer have to rely on blocky and pixelated camera footage to identify any unauthorised persons entering or leaving your building.

One thing that many business owners worry about is the fact that wireless connections can sometimes prove to be poor or unreliable, due to interference and such.

Wireless CCTV systems can be coupled with hi-gain transmitters and receivers, so that camera footage can be sent wirelessly in all weather conditions, and from great distances, as the photograph at the top of this blog post proves (there is a transmitter/receiver fixed to the top of the building).

As you might have guessed, camera footage is no longer recorded on VCR machines! Instead, they are saved onto DVRs (digital video recorders). These are basically machines with computer hard drives in them, where all footage is stored in a digital format.

There are all sorts of DVRs on the market so you can have a virtually unlimited amount of storage space if you wish to keep footage for long periods of time!

Wireless IP cameras can be connected to computer networks, so that cameras can be monitored from within the building or even from a remote location in some other country! As long as you have a decent Internet connection where the cameras are, you will be able to remotely monitor them as if you were only a few metres away from them! 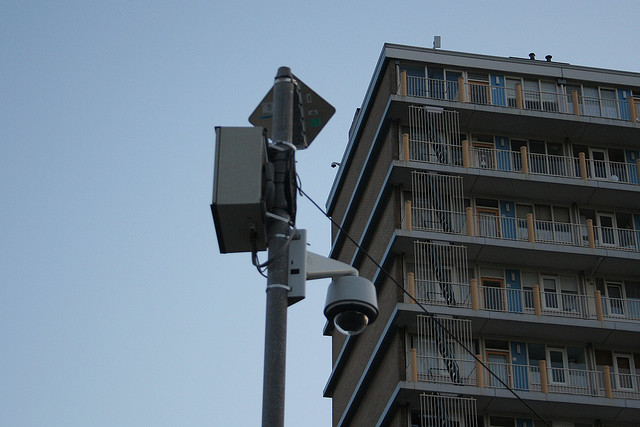