How many times have you thought to yourself, “you know what, it would be really cool if there was an app that would allow me to more easily use relevant coupons while shopping online or out about town?”  Or, maybe you’re just the type that loves a great deal, especially where saving money is concerned?  Whatever the reason, this smartphone app (designed and used largely in India), Couponraja is certainly worth checking out. 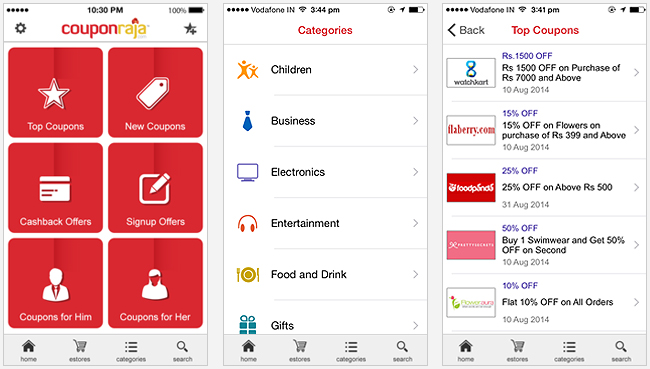 To sum things up succinctly – the Couponraja app is a free offering which compiles handy lists from all the major retailers you can think of as well as listings from big electronic retailers.  In this way, you can often snag awesome deals wherever you are shopping while many others are left to pay full price.  What’s more, this is a free app that provides a neat interface which you can tap into without the need for logins and so forth.  While it might be hard to believe that there’s actually an app that connects users with products through coupon offers and discounts which DOESN”T needless require them to sign into some kind of account, that’s precisely what it is.

What sorts of categories are we talking about here, exactly?  How about:

In other words, this is the app that you want to set aside for everyday use, whether you’re going about your daily routine, traveling, getting some shopping done, planning a holiday vacation, or grabbing a bite to eat.  At the same time, those who prefer to stick to certain brands, stores or companies can set additional filters which allow them to single out only the deals which they’re going to be interested in.  It is this ease of use and flexibility which ultimately makes it useful, especially if you do quite a lot of shopping.

As for the brands, retailers and businesses which it covers, take note of the following (as well as numerous others being added daily):

Naturally, the app itself is really just a mobile-friendly version of the main site itself: http://www.couponraja.in/, which is a rather direct compendium of offers.  It has actually been featured in mainstream news and media as well, via course such as DNA, Tech 2, India Today, techcircle.in, The Telegraph and many others.  The app itself is available for both iOS as well as Android devices too, meaning that despite whatever type of system you’re using, they’ve got you covered.