Although the Wii U hasn’t enjoyed a great deal of commercial success, the console has still been home to a number of colourful, vibrant, accessible and fun exclusives the likes of which Nintendo are so synonymous with, and side-scrolling platformer Yoshi’s Woolly World is the latest title to join those ranks.

The latest game to star Mario’s long-time dinosaur pal Yoshi, Yoshi’s Woolly World takes place in, well, a world of wool. Characters, objects, scenery – everything here is made up of yarn and occasionally other materials such as cloth, felt and plastic, giving everything a wonderful handcrafted appearance. The game is published by Nintendo and developed by Good-Feel, the latter being the same company behind the Wii’s textile-styled platformer Kirby’s Epic Yarn.

The plot of Yoshi’s Woolly World is predictably threadbare (pun intended), acting as a simple set-up for the action: bespectacled wizard and Mario series regular Kamek transforms almost all of the Yoshis of Craft Island into bundles of yarn and then scatters them across the game’s six worlds, leaving it up to series star Yoshi – as well as a second Yoshi if playing in two-player co-op mode – to overcome all of the stages within each world, rescue his friends and defeat Kamek.

You’ll run, jump and glide your way through the dozens of stages that make up the game, tackling a variety of enemies and navigating hazards such as spiked floors, rivers of lava and bottomless pits. A key component of the gameplay is Yoshi’s ability to lash out his tongue and swallow some enemies and projectiles before either spitting them back out as a ranged attack, or excreting them as balls of yarn, up to six of which can be carried and then thrown at any time – and as you’d expect, being smacked in the face by the freshly excreted remains of a fellow henchman should rattle even the most dedicated of enemies. These yarn balls not only act as projectile weapons but can also reveal invisible mystery clouds, hit distant switches, and create platforms and warp pipes in specific locations. 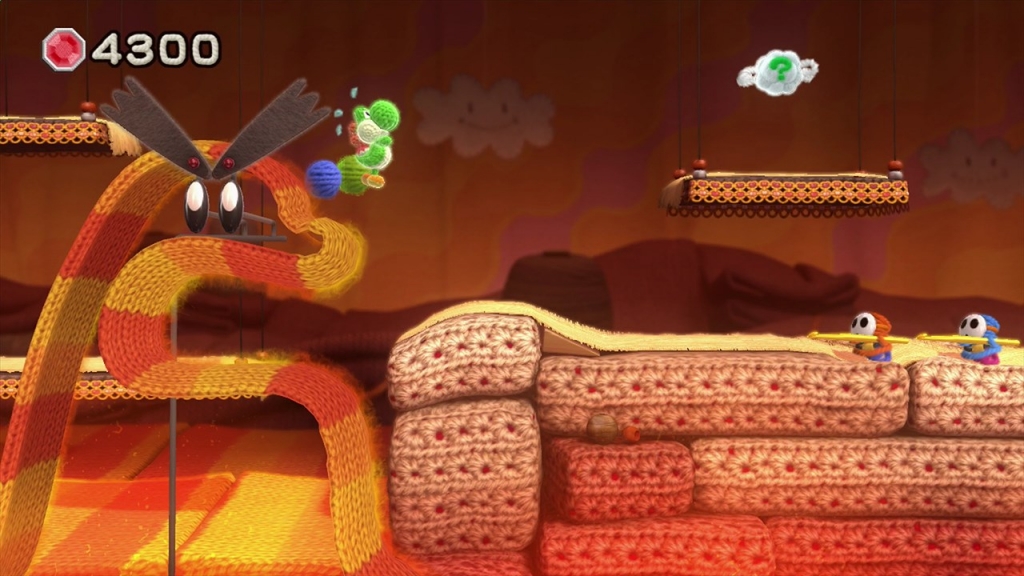 Yoshi controls well for the most part, although he can feel a little cumbersome when using his gliding move, and while the mechanic of creating and throwing yarn balls felt a little awkward at first, it was something I quickly got the hang of. There are multiple control schemes available, should you find one preferable to another, and the game is playable with a range of controllers including the Wii U GamePad, Wii Remote and more.

Perhaps the most significant flaw I consider Yoshi’s Woolly World to possess is the way in which the item-containing mystery clouds I mentioned above are implemented, as these are invisible until Yoshi or a yarn ball passes over them. As such, while it’s easy to guess the placement of some of them judging by the level design, others are found in less likely spots, leading to a lot of random jumping and gliding around the levels if you’re trying to uncover all of them. Needless to say, this can become tiresome rather than being any real fun.

Finding mystery clouds is essential if you’re planning to see everything Yoshi’s Woolly World has to offer, as the game is packed with collectibles. While you can use the beads which act as the game’s currency to purchase Power Badges for use in a chosen stage, this gradually unlocked selection of badges granting you temporary advantages such as higher defence or automatic rescue from bottomless pits, other collectibles must be discovered within the stages. There are yarn bundles, which unlock the kidnapped Yoshis, who you can then play as; art stamps, which can be used in any Miiverse messages you create; and flowers – collect every flower across all of a world’s stages and a secret level is unlocked for that world. While these numerous collectibles certainly add replayability and extra content, it’s a shame that they’re so often tied to the occasionally frustrating mystery clouds.

Even ignoring the collectibles, Yoshi’s Woolly World offers a fairly lengthy experience, as each of the six worlds contains eight stages and a secret stage, and all of these stages are quite long. There are also a number of brief bonus games available, such as if you leap through the end-of-stage hoop at the correct time – do so and you’re transported to a room in which you must collect fruit within a time-limit. The more fruit you collect, the more beads you earn. 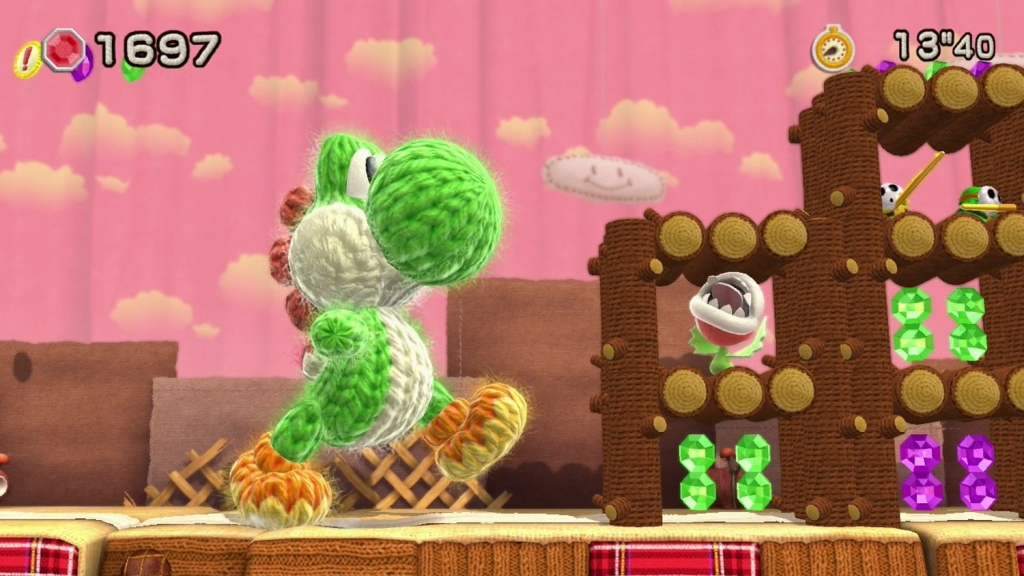 Other bonus games are found behind secret doors within the levels, and these again involve collecting items within a time-limit except you must do so as one of a number of alternate versions of Yoshi, including Motorbike Yoshi, Umbrella Yoshi and the oversized Mega Yoshi. While all of these bonus games don’t add a great deal to the overall experience, they remain fun, brief diversions.

If you’re the owner of certain Amiibo figures then the game offers you further content still, as using a Yoshi Amiibo allows a solo player to unlock a duplicate Yoshi who follows you around during gameplay, while other Amiibo such as Samus Aran, Donkey Kong and Mario unlock alternate colour schemes for Yoshi. Not having bought into the Amiibo craze myself – I’d rather hang onto my money, time and sanity – these bonuses were unavailable to me, but frankly I never felt like I was missing out on anything really worthwhile.

If you prefer your platform games served with a hefty dose of challenge (hello, Mega Man II… you bastard) then you won’t find much to test you in Yoshi’s Woolly World, as on the whole it’s a fairly easy game, although the secret stages are noticeably tougher than the regular stages, the latter only occasionally presenting particularly tricky sections. Each world also contains a mini-boss and an end-of-world boss, and while these boss battles are certainly straightforward and not too taxing, they are enjoyable.

Yoshi himself can take several hits before expiring, and your health can be replenished by collecting hearts or by passing one of the several checkpoints you come across within a stage. If you’re struggling with a particular stage then your unlocked Power Badges are there to offer assistance, and if you fancy an even more leisurely time then you can opt to play the game in Mellow Mode, which grants Yoshi the ability to fly, thus negating much of the difficulty. 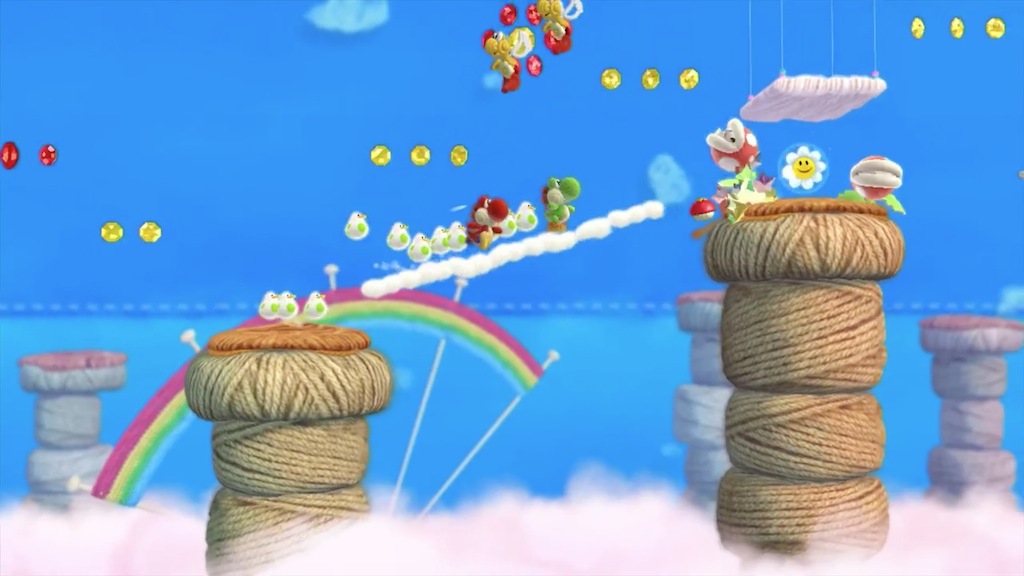 Another feature which can make the game easier or more chaotic, depending on who you’re playing with, is the two-player cooperative mode. The whole game can be played like this, with each player controlling their own Yoshi, and being able to swallow and excrete your partner as a yarn ball whenever the need arises can be very helpful at times. Whether the relationship between you and your co-op partner is strong enough to withstand passing through a dinosaur’s digestive system multiple times is another matter.

However long it takes you to play through Yoshi’s Woolly World and whatever your opinion of its level of difficulty, one thing that constantly impresses throughout is the game’s graphics, as the visual aesthetic is brought to life in fantastic detail – everything is clear, colourful and utterly charming, and there are also numerous nice touches to be found in the animations of Yoshi and other characters. It’s also impressive how Good-Feel have managed to implement the handcrafted visual style in all of the different examples of enemy design and scenery design.

Although everything looks great, one related criticism I do have is that it might have been nice to see a little more imagination in terms of the themes chosen for the worlds, as themes such as “desert”, “jungle” and “winter” have been done countless times before in so many other videogames.

Yoshi’s Woolly World isn’t just a treat for your beady little eyeballs but also for your ears, as it boasts a fantastic soundtrack packed with catchy, upbeat pieces of music which perfectly suit the game’s fun, happy vibe. A nice bonus is the fact that as you play through the game, the musical tracks you hear are added to an in-game jukebox which you can access from the main hub. Alongside this jukebox is a gallery in which you can view any enemies you’ve hit with yarn balls while playing the game. 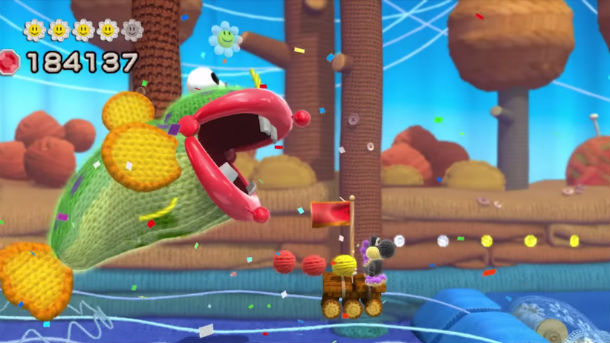 As well as the Miiverse posts you can personally create, further Miiverse integration is found in the random Miis standing around in-game (as long as you’re playing online), and in the player-created drawings and messages which appear on-screen when entering or exiting a level. While the majority of these contain little more than stamps and random scribbling, some helpful souls occasionally create messages revealing the locations of hidden collectibles. Of course, this being Miiverse, you’ll also come across some bizarre and amusing posts, my personal favourite so far being a crude drawing of a bearded man accompanied by the following scrawled message: “My beard shall guide you.” Oh, Miiverse – you so crazy.

Although the game contains Miiverse and Amiibo features, one Wii U feature it takes no significant advantage of is the GamePad controller, beyond the controller’s screen mimicking the television display. As has been the case with many other Wii U games before it, it’s a shame that Yoshi’s Woolly World doesn’t attempt to do anything interesting with the capabilities of the GamePad.

Despite its minor flaws, Yoshi’s Woolly World is an excellent platformer and a great addition to the Wii U library. While it doesn’t break the mould, it keeps you entertained by being a polished, lengthy and ultimately fun experience for one or two players, one boasting truly impressive visuals and music, and which exudes charm and joy at every turn. Yoshi may be a dinosaur, but this latest outing is solid proof that he still has plenty of life left in him yet. 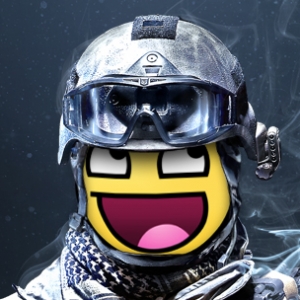 Alex De-Gruchy is a writer and editor of fiction and non-fiction whose work covers videogames, comic books and prose. As well as writing for PS4 Home, GamerBolt and Tech Daring, his upcoming fiction projects include two graphic novels and several videogames. Marvel at more wordy outpourings from his brain-meats on Twitter: @AlexDeGruchy.